Use A Water Softener And Improve Your Water Quality!

The most common water problem can clog of your pipes, cause malfunctions of your washing machine. It also makes you use larger portions of washing powder and soap.

What we're talking about here is hard water.

So what is hard water to begin with? Hard water is caused by dissolved mineral traces of primarily calcium and magnesium in the water.

It is relative easy to measure the water hardness with a test sample. It is important to do this as the buildup of clogged piped can happen even if you are not aware of it.

Water softener equipments are an often used solution to lower hardness of the water as it will limit or completely eliminate any damage.

The most common form of water softener for home users is based on ion exchange.

It works on the following principle. The calcium and magnesium ions are replaced by sodium ions. This ion exchange is made in a resin bed.

The construction of the water softener is made in three parts. Resin Tank - This contains the resin bed.

Resin Bed - This is made up of tiny bead-like material often made of styrene and divinylbenzene. The beads attract and hold positively charged ions such as sodium, but will exchange them whenever the bead encounters another positively-charged ion such as calcium or magnesium.

Brine Tank - This tank contains a dissolved solution which is necessary in order to regenerate the resin. This regeneration is for the reversing of the ion exchange, which otherwise would become depleted. The calcium and magnesium ions are removed off from the resin beads and replaced with positively charged sodium ions. The regeneration happens when the resin beads are washed by a strong salt water solution. The calcium and magnesium ions are forced by the salt to be released, and are then discharged as waste in the backwashing cycle. The beads are now once again ready to be used to lower the hardness of your water.

Modern water softeners are fully automated. Some of them are regenerated at a preset clock. Other systems use electric sensors and are regenerated when the beads are becoming less effective.

Because the calcium and magnesium are replaced by sodium some consumers are concerned by the additional intake of salt in the drinking water. However this additional salt intake from drinking the tapped water is so small that the adverse affect is minimal compared from salt intake gained from ordinary diet.

Posted by Rick Phillips at 12:47 PM No comments:

Home water softeners can take up a lot of space most conventional systems are quite bulky especially the resin tanks. If you have a large garage or utility room where you can house your softener you're in luck. However most people don't have space indoors in addition to their washer, dryer, water heater, and other large appliances. For this reason some homeowners like the idea of installing their system outside. There are some major challenges that you will need to consider before you go through with this.

A water treatment system is usually a fairly durable piece of equipment however being in the environment can degrade your system over time. If you're going to install your softener outside be sure that you get protective coverings for all the valve's and any components that will be exposed to the elements. There are systems that are sold for both indoor and outdoor use however they are not meant to be exposed to continuous sun, rain, ice, or snow. Make sure your water softening system has a warranty that covers outdoor installation before you make the decision to keep your softener system outside.

If you're installing a typical ion exchange water softening system, a salt-based system, you will need not only access to water but also access to electricity as well as a drain line. If you are able to have access to all of these installing your unit outside can be a great idea since you could create a small shed that would house your softening unit as well as house all your bags of sodium chloride. Since salt usually comes in 40 or 80 pound bags housing them outside yet away from the elements would be a big benefit.

So maybe you don't have room inside for a large softening unit but you live in a very cold climate and installing the system outside what is it too many challenges as well there are few other alternatives you could consider. A compact unit might be a good choice some units are designed to maximize their use of space or you could simply install your water softener so that it softened in your drinking water then you could get by with a unit that produced much less softened water per day. You could also consider a tankless system which essentially is a salt-free system days don't do exactly the same thing as a salt-based system does however if space is a big concern you might want to look into them.

Point-of-use softeners are also on the market now, you can get a softening system to go directly on your shower head as well some dishwashers now, with built-in softeners. Unfortunately there are some cons associated with these alternatives the point-of-use systems only work in one small area meaning you might have to purchase several to get the benefits that a whole house system would give you this might end up costing you more money.

Posted by Rick Phillips at 5:49 AM No comments:

What Exactly Are Water Softeners?

Water softener transforms hard water into the so-called soft water. Reducing its mineral contents does the transformation. Hard water mainly contains calcium and magnesium metal, and sometimes bicarbonates and sulfates. Soft water, on the other hand, is the type of water with none or little content of the mentioned minerals.

A Process is used in decreasing the calcium, magnesium, and in some cases manganese and ferrous iron dissolved in hard water. The fact is softener is a system for transforming chemically hard water into a soft water.

Softeners replace the calcium and magnesium contents in hard water by sodium. Sodium does not accumulate in pipes and also does not react to soap. This means hard water effects are eliminated. The principle of the softener system is easy to understand. Hard water is allowed to enter the water softener. It contains a layer of plastic beads and in some instances, the material used is called Zeolite. The layer of materials inside the water softener is soaked with sodium ions. Sodium is exchanged with the contents of the hard water, calcium, and magnesium. When water comes out of the softener, the water is said to be of the soft water type.

The ordinary cooking salt is cheap. The salt or sodium chloride is the source of sodium for water softeners. Large quantity of salt costs little. It is a good source for sodium used in water softener. Utilized in a water softener system are a number of cylindrical tanks and large square containers. The tanks are used as storage of already treated water and the container is for the salt used in the process. The number of tanks depends on the output and the system itself.

When it is installed for domestic or household purpose, the softener system is situated at the main entrance of the house plumbing system. In this manner of installation, all the water entering the house is already treated.

There are two main types of water softener systems. One is the electric single tank softener. This type, besides being costly, is a system with some setbacks. Soft water supply may run out since the system uses a single tank. It also may cause inconvenience because this type needs high pressure. Night hours bring high pressure. Noise caused by running motors is not welcome at these hours.

The hydraulic twin tank softener is the other softener type. This type ensures a continued supply of soft water for the household. The two tanks do the softening and regeneration processes alternatively. This way, there will be no chance of running out of soft water supply.

Salt containers should be refilled regularly. Most softeners do not have salt level indicator; it is a wise decision to check salt level periodically to avoid contamination of water tanks. The softeners operate continuously even without salt, which may result in tank contamination.

Salt-based water softener systems are not effective one hundred per cent. Only 75 per cent of the calcium and magnesium water content is removed. The salt-based softener also releases to the environment huge amount of lime brine.

A newly developed softener system is digital. The Soo~Soft Digital Electronic Water Softening System is a revolutionary innovation in water softening procedures. It is environmentally friendly and as effective as a salt-type water softener.

Posted by Rick Phillips at 6:12 AM No comments:

There are two main kinds of private well water system. Point-of-entry liquid treatment systems deal with the water wherever it comes into a home, and thus will treat your water some distance away from the actual well itself. Point-of use water treatment systems treat the water in a certain location of the house, at a specific sink or faucet or shower head, or in this case right at the well itself. There are also many other categories of well water treatment systems. Different systems purify water with different means. For instance, filters will physically or chemically remove water contaminants from your well liquid.

Some of them use powerful substances such as activated carbon to attract contaminants within the drinking and then trap them. Distillation systems will boil the water in your well and condense the vapor back into LIQUID; this is a very thorough means of liquid treatment. Water softeners, for their part, replace ions of calcium or magnesium with "softer" ions of potassium or sometimes sodium to make the water "softer," easier and less grating on your body. And some well water systems use ultraviolet light or strong chemicals to disinfect the liquid, basically killing or destroying anything that might be dangerous inside and rendering it harmless. Whatever kind of system you settle on to take care of your well water, make sure that it targets whatever problem you might have. If a lab has found too much iron in your well water, for example, you might want a treatment system that includes a special iron filter.

Posted by Rick Phillips at 12:58 PM No comments: 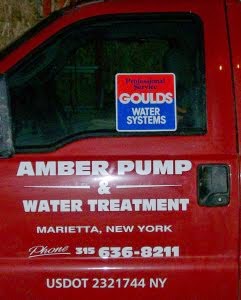